Making decisions about the nuclear sector

The Canadian Nuclear Safety Commission (CNSC) makes independent, fair and transparent decisions on licensing nuclear related activities. This is made possible through our:

The Canadian Nuclear Safety Commission regulates the use of nuclear energy and materials to protect health, safety, security and the environment; to implement Canada’s international commitments on the peaceful use of nuclear energy; and to disseminate objective scientific, technical and regulatory information to the public.

CNSC was established in 2000 under the Nuclear Safety and Control Act and reports to Parliament through the Minister of Natural Resources. CNSC was created to replace the former Atomic Energy Control Board (AECB), which was founded in 1946. Learn more about Canada's Nuclear History and the AECB.

CNSC's Commission has up to seven appointed permanent members whose decisions are supported by more than 800 employees. These employees review applications for licences according to regulatory requirements, make recommendations to the Commission, and enforce compliance with the Nuclear Safety and Control Act, regulations, and any licence conditions imposed by the Commission.

The CNSC was established in 2000 under the Nuclear Safety and Control Act to replace the former Atomic Energy Control Board and reports to Parliament through the Minister of Natural Resources on the Commission's activities under the Act. Neither the Minister nor the Governor in Council has a role in CNSC's decision making or the power of appeal. Its decisions are reviewable only by the Federal Court of Canada.

The CNSC's regulatory framework consists of laws passed by Parliament that govern the regulation of Canada's nuclear industry, and regulations, licences and documents that the CNSC uses to regulate the nuclear industry.

CNSC's Commission has up to seven permanent members that are appointed by the Governor in Council based on their qualifications and expertise and can only be removed for cause. Members are appointed on a permanent, part-time basis, meaning they also have individual jobs. Temporary members can also be appointed to the Commission. Commission members commit to the highest standards of ethics and conflict-of-interest guidelines, and carry out their duties impartially.

The Commission is an independent administrative tribunal set up at arm's length from government, with no ties to the nuclear industry.

The Commission makes its decisions transparently, guided by clear rules of procedure. Interested parties and members of the public are able to be heard at Public Commission Hearings which are Webcast live and often held in facility host communities to make them as accessible as possible to local residents.

The Commission provides extensive reasons for its decisions, which are based on information that includes public input as well as the recommendations of expert CNSC staff. Decisions, hearing transcripts, webcast archives and other documentationfor content section are publicly available on the CNSC Web site, Facebook and YouTube.

The Commission is supported by more than 800 scientific, technical and professional staff. These employees review applications for licences according to regulatory requirements, make recommendations to the Commission, and enforce compliance with the Nuclear Safety and Control Act, regulations and any licence conditions imposed by the Commission. 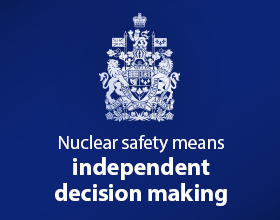 Please take a few minutes at the end of your visit today to anonymously tell us about your experience with the Canadian Nuclear Safety Commission’s (CNSC) website.

Choosing “Yes, after my visit” will open a new window that you can return to once you complete your visit to our website.

Yes, after my visit No, thank you