CNSC staff use radiation dose limits, release limits and action levels to ensure that the health and safety of workers, the public and the environment are being protected, and that licensees are demonstrating adequate control of their radiation and environmental protection programs.

Regulatory dose limits are specified in sections 13, 14 and 15 of the Radiation Protection Regulations (RPR) to limit radiation dose to workers and members of the public to levels that have been deemed acceptable.

VIDEO : What is radiation? 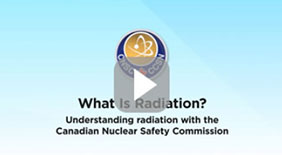 These dose limits follow the recommendations of the International Commission on Radiological Protection (ICRP), which includes some of the world's leading scientists and other professionals in the field of radiation.

Any dose limit exceedance is a violation of the RPR and triggers specific responses pursuant to section 16 of the RPR.

These responses include immediate notification of the dose to the affected person and the Commission, removal of the person from any work that would lead to additional exposure, investigations to determine the magnitude of the dose and causes of the exposure, and actions to prevent reoccurrence.

The authorization to return to work following a dose limit exceedance must be also obtained from the Commission or a designated officer pursuant to section 17 of the RPR.

Release limits are imposed by the CNSC on quantities, rates and/or concentrations of pollutants released from point sources (i.e., end-of-pipe or stack) into surface waters or the atmosphere to protect the environment and the public and to promote sustainable development.

Release limits, identified in the licence or licence conditions handbook, may be technology or risk-based. Technology limits are based on levels achievable by pollution prevention technologies and/or practices.

Risk based limits are determined through site-specific modelling of levels that would result in achieving specified criteria in the receiving environment considered to be protective of the environment and the public.

The exceedance of a release limit is a violation of a licence condition which would result in a CNSC enforcement action. 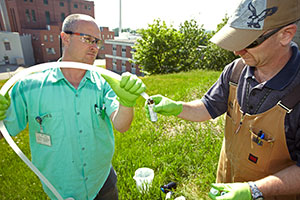 Action levels are a tool used to ensure that licensees are operating their facility appropriately and in accordance with their approved radiation and environmental protection programs, and within the design and operational parameters of their wastewater treatment and air pollution control systems.

In this respect, the use of action levels also serves as an early warning system to ensure that licensees are carefully monitoring their operation and performance, to ensure radiation dose limits and release limits are not exceeded.

An action level is defined in the RPR as “a specific dose of radiation or other parameter that, if reached, may indicate a loss of control of part of a licensee’s radiation protection program and triggers a requirement for specific action to be taken”.

The Uranium Mines and Mills Regulations provide a similar definition for action levels, although slightly modified to directly incorporate environmental protection into the definition.

INFOGRAPHIC: Canada's uranium mine and mills 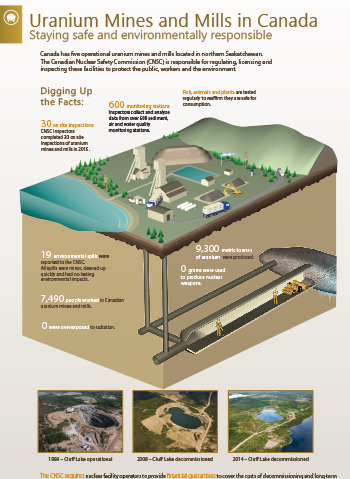 Action levels for environmental protection have also been incorporated into uranium and nuclear processing licences.

Action levels are site-specific parameters that are chosen to be effective and efficient indicators of a potential loss of control - typically set near the upper bounds of normal operating performance.

As such, reaching an action level is not a regulatory noncompliance or violation. It also does not necessarily imply a negative outcome.

As indicators of performance, action levels may also be revised to properly represent changes in the operation of the facility.

The following list provides some examples of parameters used for action levels:

Reaching action level results in increased oversight by both the licensee and the CNSC. When an action level is reached, specific responses are required pursuant to subsection 6(2) of the RPR or licence condition. When a licensee becomes aware that an action level is exceeded, they shall take the following course of action:

In summary it is important to note the difference between radiation dose limits, release limits and action levels: