The issue of counterfeit items at nuclear power plants surfaced recently in South Korea (in 2012, and again in 2013), when the Korean nuclear regulator ordered the shutdown of two reactors, on both occasions, following the discovery of falsified certificates for thousands of components (such as fuses, relays, instrumentation and switches). All four units were approved for restart once the investigation by the regulator was completed and corrective actions were taken. 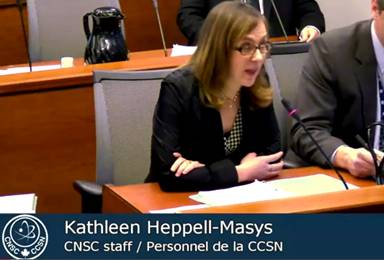 On February 6, 2014, CNSC staff made a presentation to the Commission on the topic of counterfeit, fraudulent and suspect items, describing how the Canadian nuclear power plant (NPP) operators and the CNSC are successfully addressing the matter.

Canadian NPP licensees have the primary responsibility for detecting and preventing the use of these items.

Among the key factors contributing to the worldwide spread of counterfeit and fraudulent items are the increased complexity of global supply chains, the relative difficulty of procuring some spare parts, and the ongoing demand from new and operating plants.

Some of the measures successfully put in place by the NPP operators to defend against suspect items include:

These proactive measures form the first line of a defence
to detect and prevent the intrusion of counterfeit, fraudulent, and suspect items.

In the unlikely event that the first line of defence is breached, and such items are installed at NPP sites, the inspection and testing prescribed by the licensee’s Fitness for Service Program is the next line of defence to identify and remove these items from service.

In addition to these preventive and detection programs, there are other layers of defence, which include:

This "defence-in-depth" makes the CANDU design less susceptible to the potential effects of counterfeit items.

For its part, the CNSC is closely following national and international initiatives, maintaining an open dialogue with other regulators and industry organizations.

Fraudulent items: Items intentionally misrepresented to be something they are not.

Suspect items: Items thought to be counterfeit or fraudulent.