In this Fact Sheet

This fact sheet uses the term radon to refer to both radon and radon progeny in order to simplify the text.

Radon is an odourless and colourless radioactive gas that occurs naturally in the environment as a result of the decay of uranium in soils and rocks. Uranium is widely dispersed throughout the Earth's crust and can be more concentrated in certain locations due to natural variation.

Radon emits alpha radiation and has a short half-life, meaning that it emits radiation at a fast rate.

How does radon form?

Radon comes from the decay of uranium, part of a series of 14 transformations, called a decay chain. This process takes several billion years to complete. At the end of its decay chain is lead 206 - a stable, non radioactive element.

As uranium undergoes radioactive decay, it emits alpha, beta and gamma radiation, along with a series of products that include radon. In turn, radon decays through a series of four very short-lived radioactive radon decay products, in the form of solid, electrically-charged particles that are called radon progeny: polonium-218, lead-214, bismuth-214, and polonium-214.

Because of their short half-lives, radon progeny emit radiation more quickly and present greater health risks than radon itself. The two that pose a health risk are polonium-218 and polonium-214.

Figure 1 shows the decay chain of Uranium-238, the most common form of uranium.

What are the radon-related health risks for uranium workers?

Many studies looking at the health effects of radon have been conducted throughout the years. These studies have helped understand the importance of controlling radon.

The main finding is that long-term exposure to above-background levels of radon increases the risk of developing lung cancer. Exposure to radon has not been linked to other cancers or causes of death.

The impact of smoking

Smoking poses a greater lung cancer risk than radon. Most miners are also smokers. Exposed to both cigarettes and radon, their combined risk for developing lung cancer is higher than the straight sum of the individual risks.

The health risk related to radon is caused by exposure to its progeny, which are produced when radon decays. If radon gas is present, the decay products will become suspended in the air. Because they are electrically charged, most will attach to dust particles or the surface of solid materials; some may remain unattached. Both attached and unattached fractions may be inhaled. Once deposited in the lungs, radon emits alpha radiation, irradiating and possibly damaging the living cells lining the lung.

From the 1930s to the 1950s, underground uranium miners developed lung cancer at higher-than-normal rates from their exposure to higher and largely uncontrolled concentrations of radon progeny. Today's uranium miners are much better protected from the health effects of radon.

Do uranium mines and mills increase radon levels in the environment?

No. Studies have shown that uranium mining and milling activities do not increase radon levels above background levels in the environment away from the mine site.

How is radon regulated in today's uranium mines and processing facilities?

As Canada's nuclear regulator, the Canadian Nuclear Safety Commission (CNSC) regulates radon and radon progeny in Canada's nuclear facilities to protect the health of uranium workers and the public.

Concentrations of radon in uranium mines and mills and uranium processing fuel fabrication facilities are strictly controlled and must be monitored in air to protect workers. Controls include sophisticated detection and ventilation systems that effectively protect Canadian uranium workers. Figure 2 illustrates the nuclear fuel cycle in Canada.

As part of the ongoing review of radon and health risks, in December 2009, the ICRP proposed reducing radon exposure limits. The CNSC will participate in the international review of this proposal.

The average effective dose for workers at uranium mines and mills in 2007* from all sources-including external sources, radon and radioactive dust-was about 1 mSv. Less than half of that dose was due to radon. All doses are significantly below the regulatory nuclear worker limit of 50 mSv per year. Because radon gas and its progeny rapidly decay once leaving the mine, they pose little risk to members of the public.

The International Commission on Radiological Protection (ICRP) is the international body that sets the framework for radiological protection. The CNSC incorporates the ICRP recommendations in its regulatory framework to protect Canadians from the radon that is released from the activities of the uranium industry.

(*Based on the most recent available data from Health Canada)

How do today's uranium mines and processing facilities control radon? 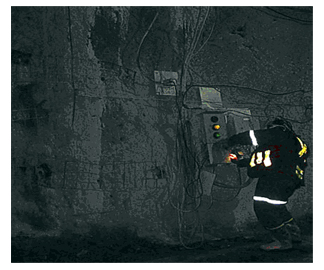 Underground monitors continually check the level of radon and display the results like a traffic light.

Some of the measures in place include:

How are the health effects of radon being tracked?

The CNSC - in partnership with universities and provincial, federal and industry stakeholders, including uranium miners and uranium processing workers - has been involved in many health studies about radon.

Some of the populations studied include:

The recently updated Eldorado Studies followed the health of 17,660 uranium miners and uranium processing workers over the past 50 years.

The study concludes that:

These findings are consistent with the results of other uranium miner studies and a combined analysis of data from 11 underground miner studies.

The findings are also consistent with the conclusions of a recent United Nations Scientific Committee on the Effects of Atomic Radiation (UNSCEAR) report , which gives a comprehensive review and summary of all radon-related research.

The CNSC and other stakeholders recently completed a feasibility study of present day Saskatchewan miners. The study concluded it would be nearly impossible to detect an excess lung cancer risk from working in today's uranium mines, because miners' exposure to radon is so low:

How is the public exposed to radon?

Figure 3 shows the sources of radiation exposure for an average adult Canadian.

The sources of natural background radiation, shown in green, include:

Man-made, or artificial, sources of radiation are shown in orange. The dominant source is from medical procedures. Controlled releases from nuclear facilities are included in the category of "Other man-made sources" which collectively account for less than one per cent of total radiation exposure.

Figure 3: Sources of radiation exposure for an average adult Canadian

The CNSC does not regulate radon in homes; that authority falls to Health Canada. For more information on the steps Health Canada has taken to protect Canadians from the potential dangers of radon gas, visit their Web site.

The International Radon Project, an initiative of the World Health Organization

More questions about radon in uranium mines and processing facilities? Contact the CNSC