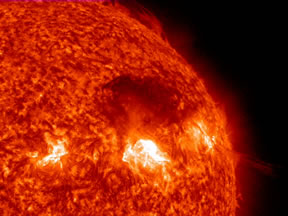 Solar flare at the surface of the sun.
(Courtesy of the Solar Dynamics Observatory)

Solar flares, also called coronal mass ejections, occur at the surface of the sun and are linked to the release of enormous amounts of energy and particles that travel rapidly in space. Canadian nuclear power plants are protected against the potential disruptions that could be caused by large solar flares.

While the particles can generate astounding visual effects like the Northern Lights when they reach the Earth, they can also cause power fluctuations and disruptions in the electrical grid and telecommunication systems.

The loss of power in the electrical grid to cool the reactor and the used fuel pools – whether caused by solar flares or by any other event – has been taken into account by reactor designers, operators and the Canadian Nuclear Safety Commission (CNSC) in developing and enforcing regulations.

The phenomenon of solar flares is well understood. If power is lost or in the event of a power surge due to disturbances caused by intense solar flare activity, the reactor's electrical distribution system would automatically be disconnected from the grid to protect the transformers and generators. This would be followed by an immediate automatic reactor shutdown.

CANDU reactors are also built in a way that make it possible to cool them without electricity for a period of time, while the necessary work to reestablish the power supply can be performed.

Nuclear power plants in Canada and their electrical systems are constructed according to the principles of “defence in depth," which means that several layers of backup safety systems are built into their designs. In other words, if one safety system fails, the reactor and ultimately the public are protected by other systems. For example, CANDU reactors are equipped with two fast acting independent and equally effective shutdown systems that do not require a power supply.

While rare, North American power utilities have now implemented safety mechanisms to protect power grids from power fluctuations that could be caused by solar flares.