The Canadian Nuclear Safety Commission (CNSC) works diligently to ensure that all licensees and the public comply with the Nuclear Safety and Control Act (NSCA). If anyone demonstrates poor compliance with the NSCA or is unable or unwilling to correct such behaviour, the CNSC has a suite of tools at its disposal to address the situation and enforce legal requirements. Administrative monetary penalties (AMPs) are one of these tools.

What is an administrative monetary penalty?

An AMP is an administrative penalty imposed by the CNSC, without court involvement, for the violation of a regulatory requirement (such a violation is also known as "non-compliance"). An AMP can be applied against any individual or corporation subject to the NSCA. The CNSC may consider issuing an AMP for any of the following reasons:

AMPs are not exclusive to the CNSC and are used by several other federal and provincial government agencies, including Transport Canada, Innovation, Science and Economic Development Canada and the Canadian Radio-television and Telecommunications Commission (CRTC). Organizations in other countries, such as the United States, have also incorporated AMPs as a part of their regulatory regimes.

A short history of AMPs at the CNSC

On June 29, 2012, the Jobs, Growth and Long-term Prosperity Act (Bill C-38) resulted in amendments to the NSCA and gave the CNSC the authority to establish an AMPs regime through its regulations.

Following extensive outreach with stakeholders, the Administrative Monetary Penalties Regulations (Canadian Nuclear Safety Commission) came into force with their publication in the Canada Gazette, Part II, on July 3, 2013. Since then, the CNSC has issued 21 AMPs.

CNSC recognized as an AMPs leader

Despite being relatively new to AMPs, the CNSC has quickly become a Canadian leader in this domain among federal and provincial enforcement agencies. Jean-Claude Poirier, a Senior Project Officer at the CNSC and administrator of the CNSC’s AMPs program, recently co-chaired the 2017 Community of Federal Regulators (CFR) AMP National Symposium alongside Transport Canada. More than 120 participants attended this event and discussed a variety of pertinent topics, from policy to reviews and appeals. CNSC Commission Secretary Marc Leblanc noted participants’ high praise for the CNSC’s success with the use of AMPs: "I was impressed by the community’s esteem for our AMP system – they refer to us as leaders in this field." 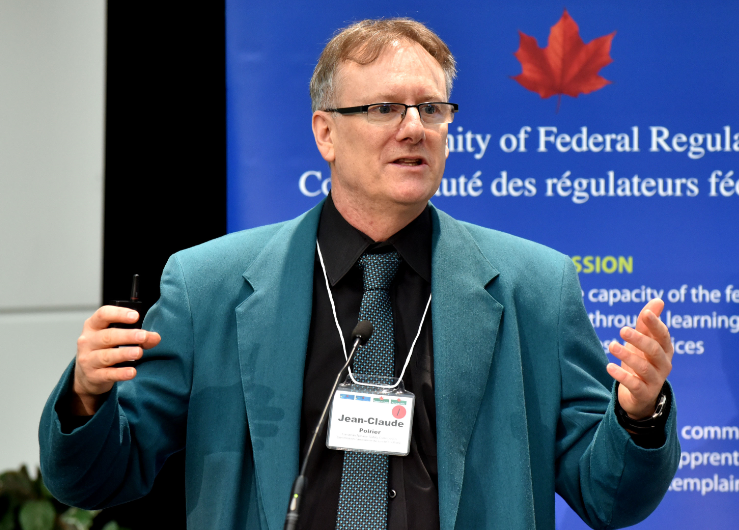 The CNSC has also been recognized in Regulatory and Corporate Liability from Due Diligence to Risk Management, the most up-to-date Canadian law book on regulatory and corporate liability, for its fairness and practicality in the weight factors for calculating AMP amounts.

Moving forward, Jean-Claude Poirier will continue to chair the CFR AMP Working Group to learn from other government regulators’ experience while sharing the CNSC’s resources and best practices in this field.