The health impacts of the Fukushima accident will be assessed for the next several decades. Reports from several international agencies presenting findings are becoming available. The availability of further monitoring data and more detailed information about implementation of protective measures will allow for more refined assessments in the future.

The CNSC closely monitors reports and information published by credible organizations, reviewing new information as it becomes available. This knowledge is integrated into the CNSC's regulatory framework, when warranted.

Comparison of recent UNSCEAR and WHO Reports

The overall findings of the 2013 United Nations Scientific Committee on the Effects of Atomic Radiation (UNSCEAR) Report are in good agreement with the two reports published by the World Health Organization (WHO, 2012; 2013). All reports conclude the predicted health risks as a result of the Fukushima nuclear accident remain low and no observable increases in cancer risks above baseline rates are anticipated for members of the public in Japan and elsewhere.  Likewise, no discernible increases in cancer or other diseases are expected among the majority of workers; however, the most exposed workers will continue to receive regular health checks.

The 2013 UNSCEAR Report used more comprehensive data than were available for the two WHO reports discussed below. It was therefore possible to make more realistic assumptions in parts of the assessment. For example, the UNSCEAR report contained more information regarding: the evacuated areas, patterns of movement of the evacuees, wind patterns, details on the implementation of protective measures and additional monitoring data for internal and external exposures. Furthermore, since doses were assessed for a longer time period (March 11, 2011 to October 31 2013), UNSCEAR was able to make projections regarding health risks over the first 10 years after the accident as well as up to the age of 80 years. In comparison, the WHO (2012) was unable to estimate doses beyond the first year as the report was based on relevant information collected up to mid-September 2011 and would have resulted in a great degree of uncertainty without more information.

Additional analysis performed by UNSCEAR, but not considered by WHO, was an exposure assessment of selected plant and animal species (i.e,  non-human biota) in the environment. Exposures of both marine and terrestrial non-human biota following the accident were, in general, too low for acute effects to be observed; though there may have been exceptions because of local variability.

Detailed summaries of the findings of the UNSCEAR and WHO reports follow below.

Scientific Annex A: Levels and effects of radiation exposure due to the nuclear accident after the 2011 Great East-Japan Earthquake and Tsunami

The findings are based on estimates of the exposure of various population groups - including children - as well as scientific knowledge of health impacts following radiation exposure.

UNSCEAR's chairman Carl-Magnus Larsson said based on the findings: "UNSCEAR does not expect significant changes in future cancer statistics that could be attributed to radiation exposure from the accident". 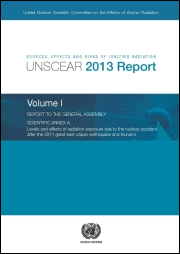 Highlights of the Report

As lead health agency within the United Nations, the World Health Organization (WHO) is responsible for the international public health response in emergencies. As part of this responsibility, the WHO published a Health risk assessment (February 28, 2013) for members of the public and emergency workers after the Fukushima Daiichi nuclear accident.

This report, written by independent international experts in radiation risk modeling, epidemiology, dosimetry, radiation effects and public health, provides an assessment of the potential health impacts related to the releases of radiation after the nuclear accident. 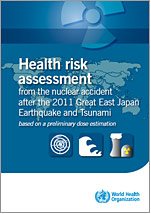 For the general population:

The authors of the report caution members of the public about the uncertainty related to their estimates and state that “dose estimates and assumptions used in this assessment were deliberately chosen to minimize the possibility of underestimating eventual health risks.” They also call for ongoing health and environmental monitoring, and warn against neglecting the psychosocial impact of the tsunami and nuclear accident on health and well-being of the population.

WHO Preliminary Estimate of Radiation Doses

As part of the overall health risk assessment being carried out by the World Health Organization (WHO) of the global impact of the accident at the Fukushima Daiichi nuclear power plant, the WHO published a Preliminary dose estimation (May 23, 2012) report.

This report, written by an international expert panel, gives preliminary estimates of public radiation exposure resulting from this accident. Doses are assessed for different age groups and locations. The Health risk assessment, published separately was discussed above.

The effective dose (unit of mSv) is a measure of dose designed to reflect the amount of damage caused by radiation exposure to the whole body. Doses have been estimated for the first year after the accident.

This dose assessment should be considered as preliminary. The availability of further monitoring data and more detailed information about implementation of protective measures will allow for more refined assessments in the future.

The CNSC has launched a video series to address some of the many questions asked by the public following the Fukushima accident. In these videos, CSNC staff experts answer common health-related questions in simple language:

Levels of radioactive cesium from the 2011 Fukushima Daiichi nuclear power plant accident detected off the U.S. west coast pose no health risks, according to experts at the Woods Hole Oceanographic Institution. The highest level reported to date (11 Bq/m3) is more than 500 times lower than U.S. government limits for drinking water. It is also well below limits of concern for direct exposure while swimming, boating, or any other recreational activity. This recent data was released by Our Radioactive Ocean, a citizen science sampling effort launched by Dr. Ken Buesseler in 2014 to monitor ocean waters for radionuclides from the Fukushima accident.

A recent study published by the National Academy of Sciences of the United States of America shows that the committed effective dose received by humans based on one year's average consumption of Pacific bluefin tuna contaminated from the Fukushima-Daiichi accident is comparable to, or less than, the dose we routinely receive from naturally occurring radionuclides in many food items, medical treatment, air travel or other background sources. To put this into perspective, the study indicates that the dose is only about five percent of the dose from eating one banana.

Below are selected quotes from letters sent by international radiation protection specialists to Japan's Nuclear Disaster Expert Group. These letters collectively highlight that the potential effects of radiation exposure are minimal compared to the observable effects of stress and stigmatisation on Fukushima residents.

"In summary, the international experts have concluded that this catastrophic accident has providentially resulted in very small radiation doses in general and therefore in no discernible health effects."

Abel J. González
Academician at the Argentine Academies of Environmental Sciences and of the Sea
Vice-Chairman of the International Commission on Radiological Protection (ICRP)
Representative in the United Nations Scientific Committee on the Effects of Atomic Radiation (UNSCEAR)
Member of the Commission of Safety Standards of the International Atomic Energy Agency (IAEA)
Senior advisor to the Argentine Nuclear Regulatory Authority.

"Risks from radioactivity and ionizing radiation as a genotoxic agent have to be taken seriously and assessed with utmost care. Media and political actors often lack the necessary prudence and appropriate knowledge. This results in improper comparisons and the creation of fear from simplistic concepts like the LNT-hypothesis taken out of its radiation protection context."

Werner Burkart
Professor for Radiation Biology at the Faculty of Medicine of the Ludwig Maximilians University in Munich
Former Deputy Director General of the International Atomic Energy Agency (IAEA).

"Since 2011, I participated in two international projects focused on the assessment of health effects of the FDNPP accident organized by two respected bodies, the World Health Organization (WHO) and the United Nations Scientific Committee on the Effects of Atomic Radiation (UNSCEAR). Both of them came to similar conclusions that future radiation-induced health effects in the population of the Fukushima prefecture were unlikely."

Mikhail Balonov,
Professor Former Member of the International Commission of Radiological Protection (2001-2013)
Consultant to the World Health Organization and the United Nations Scientific Committee on the Effects of Atomic Radiation.

"Two major international reports (from WHO and UNSCEAR) assess the future health risks after the accident at Fukushima. Although these reports used somewhat different data and methods, they both come to similar conclusions: the health risks linked to radiation exposure due to the events at Fukushima Dai-ichi nuclear power plant will remain low (though probably not zero for some groups including young people living in areas near the plant)."

"The health risks from radiation exposure have been studied for over 100 years and are quite well-known. Current independent estimates by the World Health Organization (WHO) and the United Nations Scientific Committee on Effects of Atomic Radiation (UNSCEAR) indicate that the risk of future cancer from the accident is very low although nobody can say a small risk does not exist."