The environmental protection review reports offer a summary of CNSC staff’s technical assessment of how effectively licensees are protecting human health and the environment in the communities in which they are operating.

The Blind River Refinery is owned by Cameco Corporation and is located halfway between Sault Ste. Marie and Sudbury, on the north shore of Lake Huron. Under Cameco’s current operating licence, the Blind River Refinery is authorized to process natural uranium concentrate (also known as yellowcake) into natural uranium trioxide (UO3). It then ships the UO3, an intermediate product of the nuclear fuel cycle, to the conversion facility in Port Hope, Ontario, for further processing.

The summary that follows highlights key areas of interest from the environmental protection review report for the Blind River Refinery. It represents only some of the information presented in the full report.

The purpose of the report is to share CNSC staff’s findings from the review of Cameco’s environmental protection measures. This includes any possible environmental releases as part of normal operations and the risks that radiological or hazardous substances pose to the environment and human health. The report draws on information provided by Cameco and the CNSC’s technical assessments, including:

Overall, CNSC staff found that Cameco continues to implement and maintain effective environmental protection measures to adequately protect the environment and the health of people living in and around Blind River. CNSC staff found that the potential risks to the environment from any of the releases observed over the last 5 years are similar to natural background levels and that any health risk is similar to that experienced by the general public in other parts of the province.

In the nuclear industry, any kind of contaminant emitted by a facility is called a release. This report looks at different kinds of releases and their possible impacts on the land, air and water in the area surrounding the Blind River Refinery, as well as any potential impact on human health.

The graphic below illustrates how a release may reach the environment through what’s called exposure pathways. In the case of the Blind River Refinery, this graphic is a simplified representation of the actual facility. For example, the facility releases treated effluent about 500 metres from the shoreline via a diffuser, not directly from the shoreline as shown. 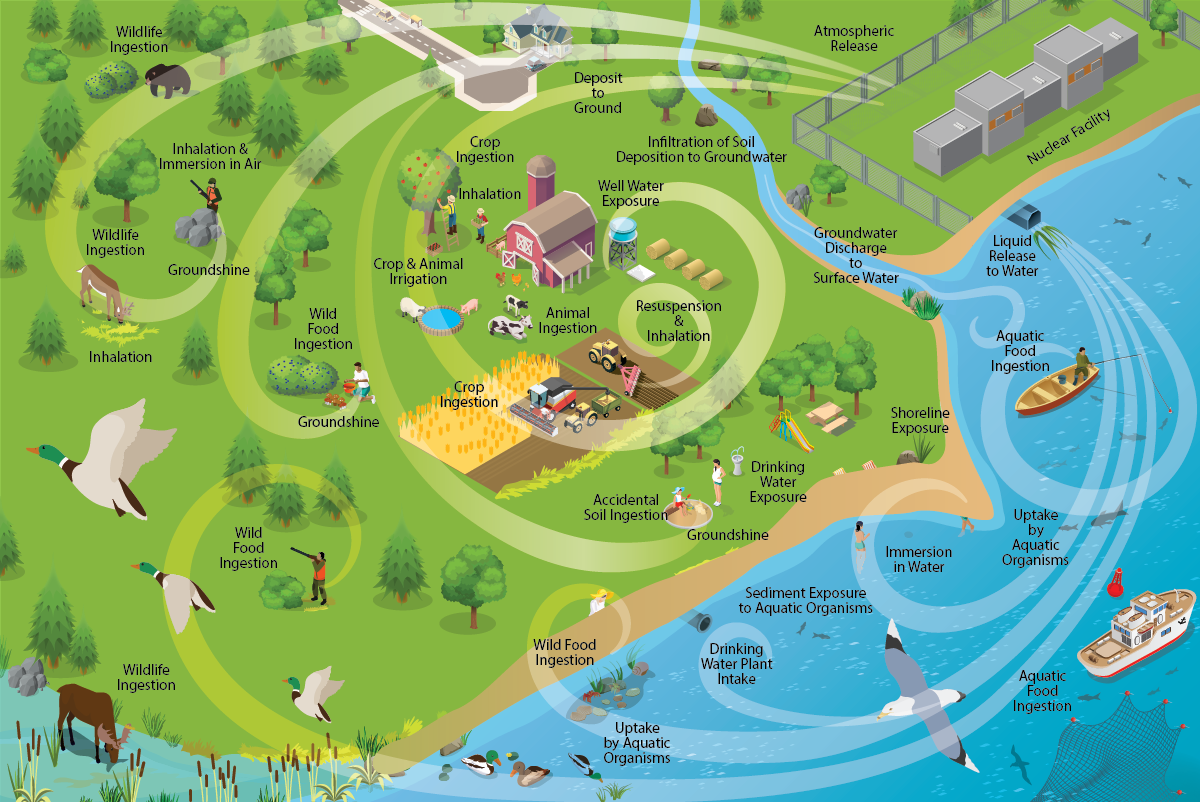 Cameco must monitor its releases and measure them against pre-established limits. It then reports its results to the CNSC and other levels of government. The CNSC verifies this data by conducting reviews and inspections of Cameco’s environmental protection programs as well as by using mechanisms such as the IEMP (see CNSC’s monitoring).

Under the IEMP, CNSC staff take samples, such as air, water, soil, sediment, vegetation, or some local food like meat or vegetables, from public areas near nuclear facilities. These areas may include parks, farmland and beaches. The samples are then tested at the CNSC’s own laboratory for contaminants related to each facility's operations.

Laboratory specialists analyzed samples in the CNSC’s laboratory in Ottawa. The levels of uranium, nitrate and pH in all of the samples measured in 2018 were below available guidelines and were similar to the range of results from the 2013, 2014 and 2017 sampling campaigns.

Our IEMP page has more information, including detailed sampling results.

Cameco uses a variety of air pollution control equipment that reduce emissions to air. Such equipment includes bag houses, which are devices that use fabric bags or cartridge filters to remove particulates from a gas before discharging into the air. The majority of air emissions from the facility come from stacks: the absorber, dust collection exhaust vent, and incinerator. Dust samplers collect samples from the stack gas streams to measure particulates. The absorber stack also has an analyzer to measure nitrogen oxide emissions.

The monitoring results showed that air emissions of uranium, nitrogen oxide and particulate were consistently several orders of magnitude below licence limits during the monitoring period. As a result, CNSC staff concluded that the facility’s emissions are not impacting people and the local environment.

Cameco monitors uranium, nitrate, radium-226 and pH in effluent released from the facility. Liquid effluent is stored in 3 process lagoons. The facility also uses a storm-water lagoon to collect surface water run-off from the paved areas on site, which is also transferred to 1 of the 3 process lagoons, before being discharged. Cameco then releases treated effluent into the North Channel of Lake Huron using an outfall pipe and diffuser, which ensures the concentration is diluted at least 100 times.

The monitoring results showed that water releases (treated liquid effluent) were well below licence limits, leading CNSC staff to determine that Cameco’s treatment of liquid effluent is providing appropriate protection to people and the environment around Lake Huron.

Soil: deposits on the ground

The maximum uranium soil concentrations measured near the facility were slightly above Ontario’s natural background levels of up to 2.5 μg/g (micrograms per gram), but well below the most restrictive soil quality guideline set by the Canadian Council of Ministers of the Environment.

Notes: Distances are measured from the facility perimeter. The maximum uranium concentration is the highest result from samples collected across 9 locations each year.

When ionizing radiation penetrates the human body or an object, it deposits energy. The energy absorbed from exposure to radiation is called a dose. Under the CNSC’s regulations, the maximum dose limit to a member of the public is 1 mSv (millisievert) per year. This is well below levels where any measurable health effect would occur.

To calculate the effective dose to people living near the facility, Cameco looked at different groups of residents:

Cameco also considered how residents of all ages could be exposed to radiological substances, such as through breathing the air; eating local fish, wild game and fowl; drinking water; or picking up objects found on the ground.

In the last 5 years of monitoring, the dose resulting from radiological material in the air and water, as well as from material stored on site, has remained constant at 0.005 mSv per year. This represents the highest dose to a person living and working near the facility as a result of current operations and past releases.

Given that 0.005 mSv is well below the annual dose limit of 1 mSv, CNSC staff found that radiological emissions pose a negligible risk to human health.

Reviewing and conducting health studies is another way CNSC staff ensure that the people living near nuclear facilities are protected. Population and community health studies indicate that common causes of death among the population of Algoma (including Blind River) are heart disease, lung cancer and dementia. This is similar to the rest of Canada, where heart disease and cancers are the 2 leading causes of death.

To get a snapshot of the health of the population living near the facility, CNSC staff looked at a number of resources, such as:

Based on exposure and health data, CNSC staff have not observed and do not expect to observe any adverse health outcomes to people in the area due to the facility’s operations.