Overexposure to member of the public at Air Canada

On June 6, Air Canada informed the CNSC that one of its workers (not designated as a nuclear energy worker) had received a dose of 1.06 mSv for the 2017 calendar year. As a result, Air Canada implemented improved dose monitoring and dosimeter control procedures. CNSC staff are satisfied with the actions taken by the carrier to help prevent recurrence of such an incident. 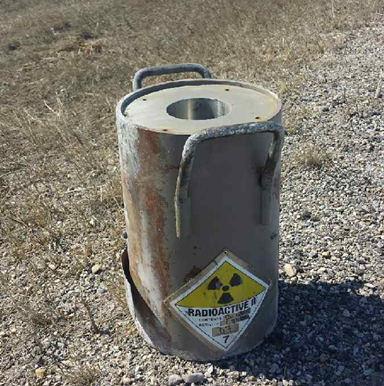 On April 19, 2018, the Canadian Nuclear Safety Commission (CNSC) was informed of a package with radiation warning labels found on the side of the highway near Gleichen, Alberta. The Type A package belonged to Quantum Petrophysics, a company based in Blackfalds, Alberta. The local RCMP was contacted and closed highway 901 between junctions 817 and 547 until the source being transported in the package was located and secured. CNSC staff were present on site and ensured that the licensee safely recovered and stored the source.

There was no radiological release to the environment and there is no impact to the health or safety of the public.

For more information, read the CNSC’s fact sheet on Regulating the packaging and transport of nuclear substances in Canada.

On March 1, 2018, 20/20 ND Technologies Inc., reported to the CNSC, as required, of a fire involving a licensee vehicle that was carrying a radiation exposure device. The company, located in Grande Prairie, Alberta, is licensed by the CNSC to use exposure devices containing nuclear substances for radiography. An exposure device was removed from the vehicle after the fire was extinguished by the local fire department. There was no damage to the device as a result of the fire.

There was no radiological release to the environment and there is no impact to the health or safety of the public. 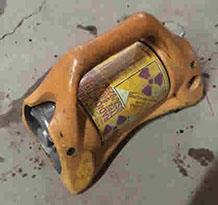 Image: Above is the recovered radiation exposure device. These devices are subject to rigorous testing, including a fire test of 800 degrees Celsius for 30 minutes, in accordance with the Packaging and Transport of Nuclear Substances Regulations, 2015.

Highway 17 near Sault Ste. Marie, ON

The Canadian Nuclear Safety Commission (CNSC) was informed on January 7, 2018, of a minor traffic accident involving a tractor trailer transporting uranium concentrate to Cameco's Blind River refinery. The accident took place on the Trans-Canada Highway (Highway 17) between Wawa and Sault Ste. Marie, ON. The CNSC monitored this event closely throughout the day and was in communication with the parties involved. Cameco's response team was dispatched to the scene and confirmed that only the exterior surface of the trailer was damaged. There was no damage to the transport packages and therefore no impact to members of the public or the environment.

Tiverton and Teviotdale, ON

The CNSC was informed by Bruce Power on May 18, 2017 of two separate transport incidents involving the shipment of low-level radioactive loads from the Bruce Site to a licensed storage facility. In both cases, the load was contained, but the load shifted in transit. The drivers detected the shifting and followed procedures to stop their trucks to inspect. There was minor damage to one of the containers but no release of radioactivity. The trucks remain parked in secure locations and will be sent back to Bruce Power once the loads are secured.

There was no release of radioactive material and no exposure to the public.

Engtec Consulting Inc. reported to the Canadian Nuclear Safety Commission (CNSC) that it had lost a Troxler Model 3440 portable nuclear gauge on the morning of Wednesday, May 17, 2017, while it was in transport between Toronto and Brampton, ON.

The device was transported in a yellow box, classified as a Type A package, 81 cm (32") length X 43 cm (17") wide X 46 cm (18") high. The portable gauge is about the size of a shoebox, with an electronic keypad and a metal handle extending from the top. It contains two radioactive sealed sources: one of cesium-137 and one of americium-241/beryllium.

The portable gauge does not pose a hazard as long as it is not tampered with or damaged. If the gauge is found, refrain from moving the gauge and contact the Toronto Police Department at 416-808-2222. 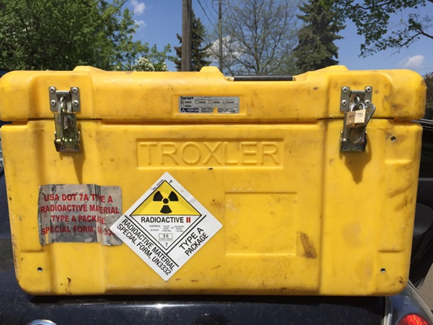 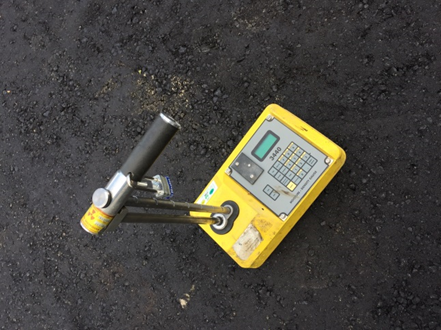 The CNSC was informed by Cameco of a traffic accident involving a tractor trailer transporting uranium concentrate from Montréal to Cameco's Blind River refinery. There was no damage to the trailer or to the uranium containers, resulting in no impact to the public or the environment.

Highway 17 near Massey, ON

The CNSC was informed on April 17, 2016 of a traffic accident involving a tractor trailer transporting uranium concentrate from Cameco's Blind River refinery to its Port Hope conversion facility. The accident took place on the Trans-Canada Highway (Highway 17) near Massey, ON at around 8:30 a.m. There was no damage to the transport packages and therefore no impact to members of the public or the environment.

The CNSC was informed on February 21, 2016 of a damaged package containing radioactive materials at the Bathurst Airport in New Brunswick. As a precaution, the aircraft was isolated and the airport was temporarily closed pending verification of the package condition.

It was confirmed that the package sustained only minor damage to the exterior box, and the container holding the nuclear substances within the package was undamaged. There was no release of radioactive material and no possibility of exposure to any workers.

Cameco notified the CNSC of a transport accident involving uranium yellowcake that took place on Highway 4 near Swift Current, SK. Cameco activated its approved Emergency Response Assistance Plan, as per procedures, and sent specialists onsite to assess the situation. CNSC inspectors were also dispatched to the accident site to oversee the licensee's response.

The cleanup activities were completed on January 13, 2016, and the highway reopened. Cameco's assessment revealed a minimal and contained spill of uranium yellowcake onsite. The spill was cleaned up, and a survey following the cleanup confirmed that there is no residual contamination. There was no impact to members of the public, the environment or first responders as a result of the spill.

The container that had suffered a breach was sealed and safely placed inside an overpack. It is now being transported to one of Cameco's licensed facilities in Saskatchewan for repackaging before the shipment continues to Cameco's Blind River Refinery in Ontario. A CNSC inspector oversaw all actions taken at the site, and the CNSC is satisfied that Cameco's Emergency Response Assistance Plan was implemented properly and successfully.

This accident will be discussed at the next Commission meeting to be held on January 28 at 9 a.m.